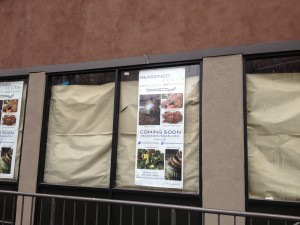 Vegan signs in the window

I live in Harlem. ?Not Central Harlem but South Harlem which real estate developers have tried unsuccessfully to name Soha. ?I am about a block and a half from the northern boundary of Central Park at 110th Street. ?The chic development of Harlem is not where I am. ?It’s a couple of blocks over on Frederick Douglass Boulevard, which has taken off in the last couple of years. ?You trip over one bar or restaurant after another. ?I knew things were changing dramatically when a Starbucks moved in on 118th Street. ?They do their market research. ?But my neighborhood hasn’t experienced that. ?Until now. ?This is not a Starbucks experience but on my corner on the first floor right under the mosque someone is intending to open a vegan restaurant. ?It stopped me in my tracks when I passed vegan signs on the windows a couple of months ago where before they had declared “Harlem Fish & Chips.” ?After two years of waiting for more fried food, but at least it would be fish, the name changes and with it – if it really ever arrives – a cultural shift. ?So now we are waiting to see 1. if this joint will open, and 2. if it can attract sufficient interest to support a 50 seat – not a take out – vegan restaurant at the corner of 113 and St Nicholas Ave. ?Changing times indeed. 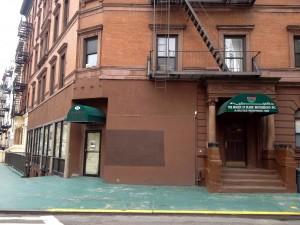 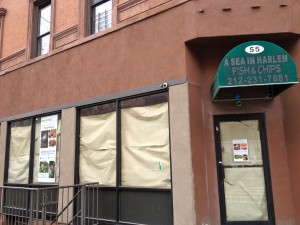 Vegan signs on side; Harlem Fish & Chips at front