Confusing Arts and Culture in Minneapolis 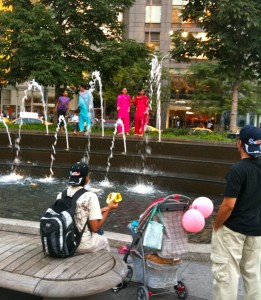 In The Opinionator (http://opinionator.blogs.nytimes.com/2013/04/19/the-music-of-flow/)?a blog of the New York Times, Richard Carrick wrote about “flow”, the concept developed by Mihalyi Csikszentmihalyi, a psychologist trained at the University of Chicago, and now teaching at Claremont Graduate University in California where he is also director and founder of the Quality of Life Research Center. ?Mr. Carrick, a conductor, composer, and pianist, is returning he says to Mr. Csikszentmihalyi’s concept of flow (?the state in which people are so involved in an activity that nothing else seems to matter?) to investigate how it might apply to composing music. ?I am equally fascinated by this concept. ?I wrote a paper published by the UNESCO Observatory E-Journal (http://stage2.abp.unimelb.edu.au/unesco/ejournal/pdf/llees-paper.pdf)?exploring flow in relation to cities and their citizens. ?The point was to find a way to talk about how we live and experience cities while avoiding the use of the word “creative.” ?Tons of people engage with their city everyday in myriad ways when they buy a newspaper or a coffee, take their children to the park, ride their bicycle to work, or negotiate the scrum on the subway, completely caught up in timeless, rewardless but captivating moments, and none of these activities would classify them as “creative.” ?Yet they contribute to the texture and personality of the city, to its “flow,” just as much as the artist who is singing every night at the opera. ?New York and London, Istanbul and Rio, are made up of citizens doing what they do, but as only the residents of those cities can do them. ?Where “creative” tends to exclude, “flow” includes. ?As I wrote in the paper, “The broader category of flow forces us to consider factors that we might otherwise overlook if we adhered too closely to creativity in its more restricted sense. It presents the challenge of considering, for example, ALL the people who live in our exemplar city, namely those who would not necessarily consider themselves either non-conformist or creative.” ?I’ll stand by those words.